Extreme milkshakes. The well-garnished milky beverage game of Sydney has reached peaked virality. Donuts perched upon mason jars, Kit-Kats wedged like an unholy crucifix: doused in chocolate sauce knotted with lashings of whipped cream, a striped straw puncturing everything in its path, impaling every adornment. Heavy handled jars of flavoured milk are spewing from so many cafes in pure copycat style, each establishment attempting to outdo the last, to outplay the originals who rightly hold the claim to fame. Freddo Frogs drowning in salted caramel milk, achingly slow, their faces submerged with that deranged smile like something out of a horror film, ganache is oozing from its enormous lip, pretzels, M&Ms and 100’s and 1000’s tacked on just for show. And the Oreos, my god the Oreos, they’re everywhere, and everyone’s got one, and everyone’s holding one of these extreme milkshakes, gnashing at food for the sake of social media, exchanging calories for notifications, it’s 8 o’clock in the morning and everybody’s drinking them to avoid the hour long lines from the brunching hour onwards to attain the Thing. The cult. The cult of Extreme Milkshakes. It’s here and we’re all trapped in a vortex of milk and Nutella and garnishes the moment we open Instagram.

But, if you can’t beat them, join them. Here are three flavours of my own: S’Mores Chicken, Bacon Burger and Coles Baked Fresh Today Bakery Aisle. Be inspired. Eat marshmallows and chicken. Milkshake flavours are irrelevant now, the duty falls upon whatever lies on top. May God have mercy on us all. 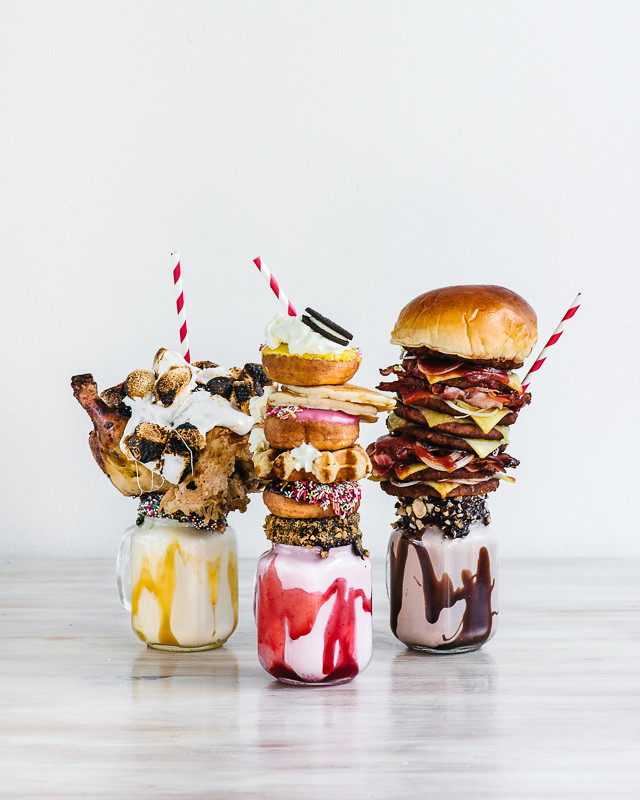 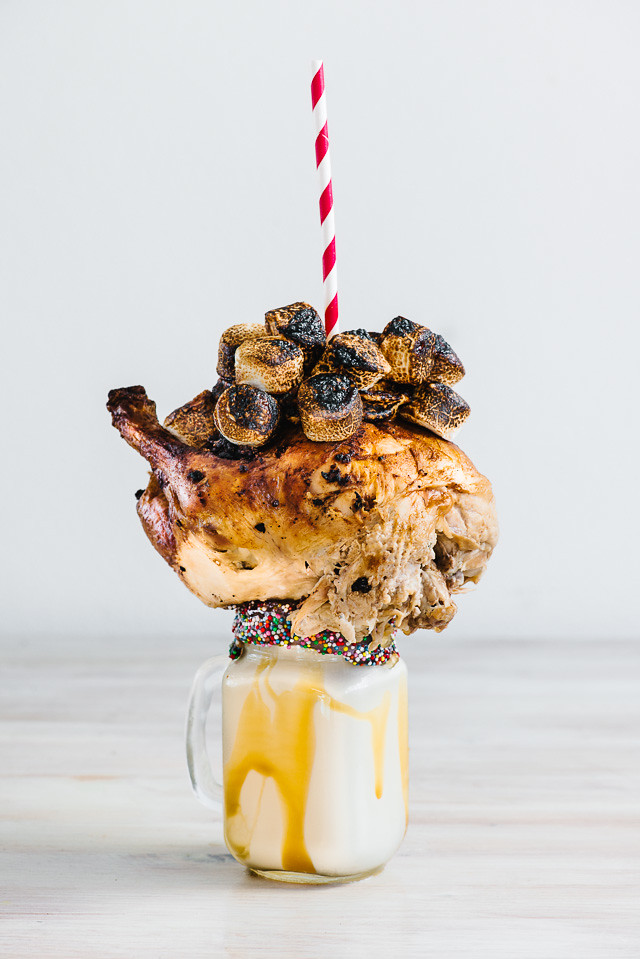 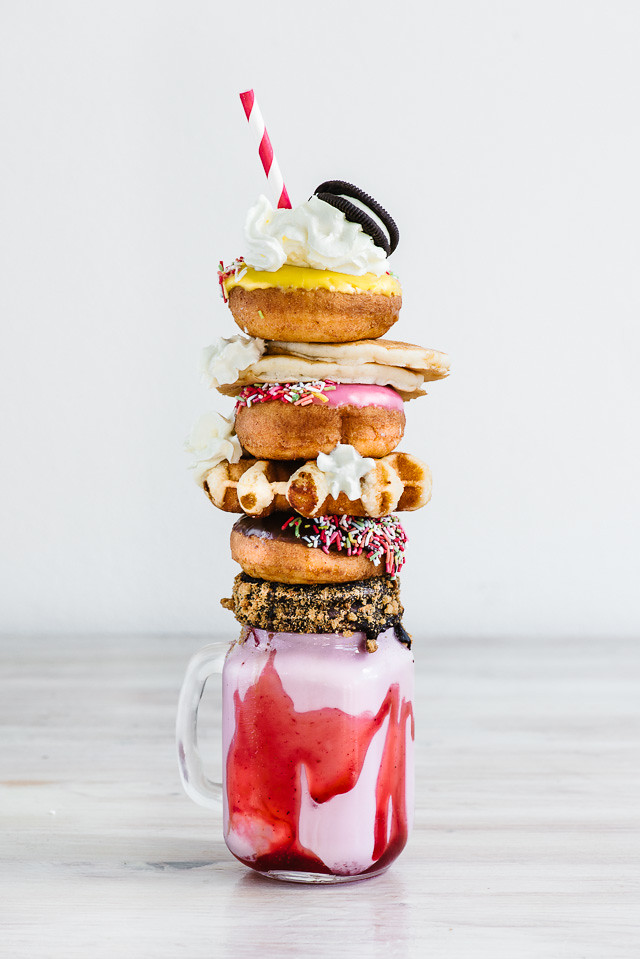 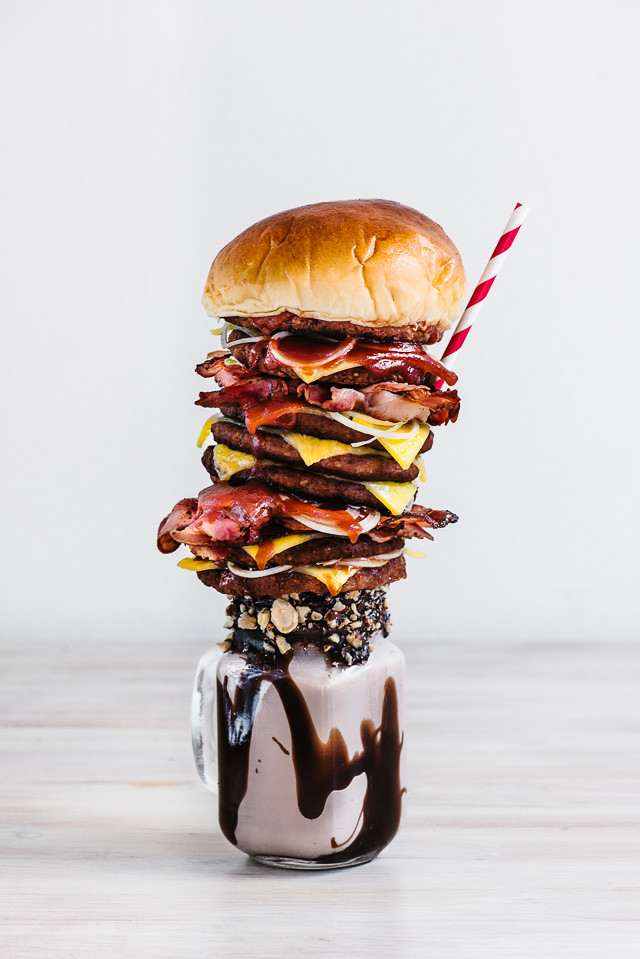 Before I begin my usual selfish ramble about how wonderful food is I need to thank Diana of Diana’s Desserts for this incredible apple cider baked donut recipe. I’ve seen the term “Apple Cider Doughnuts” wafting about food blogs like crazy as of late but after some investigation I’ve found most of them seem to stem from this recipe. So thank you, Diana, this recipe is amazingly delicious for something so simple (and since I busted my handmixer the other day this recipe was an absolutely blessing to my unfortunate circumstance). I’ve added my own garnishes to these lovelies (because what’s the fun in cooking straight from a recipe?); my simple apple cider glaze and apple bark. It’s important to use a good quality apple cider here as it is the only wetting agent for the glaze (so if you were considering using Strongbow kindly close this browser now :)). And as for my apple bark – this was a complete(ly successful) afterthought that went down a treat providing a welcomed crunchy tang.  You may want to organise this a few hours prior to baking your goods as it will need around 3 hours in the oven.

As you can see I’ve used donut pans, mini donut pans and a baby cupcake tin so in the spirit of concise headings I’ve umbrella’d these delicious gems under “baked goods”. This recipe does not discriminate against shape! For the apple cider baked goods

4. Divide your mixture between pans/tins of your choosing. For a donut pan bake for 10 minutes, for mini donuts and baby cupcakes bake for 5-7 minutes or until the tops spring back when touched.

5. After 5 minutes transfer to a wire rack and allow to cool completely.

For the apple glaze

1. Combine icing sugar, cinnamon and cider in a small bowl and stir well to remove any lumps.

For the apple bark (do this the morning before)

1. With a sharp vegetable peeler peel thin strips of apple, including the skins, and place on a baking tray. Sprinkle with cinnamon.

2. Bake in a cool oven (around 80-100°C) until completely dried, between 2 -3 hours. (If you are doing this day before you may need to re-crisp your apple bark for half an hour before assembling). Once dried, the apple skins will shrink and curl like little twigs. The apple strips will look like leaves.

1. Hold your baked good up-side-down and dip into the glaze. Shake of any excess and place back on the wire rack. Take a piece of apple bark and place on baked good while the glaze is still wet so it stays in place once dried. Continue with the rest of your donuts and baby cupcakes. Bring these along to any dinner party and they will be very, very well received. Trust me; I know from experience.